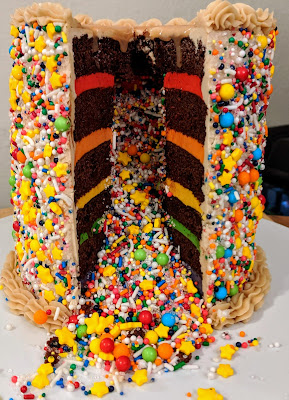 This cake, exploding with sprinkles has been declared, by my son, “The BEST Birthday Cake Ever!” And I have to tell you that it actually isn’t all that hard to make. A little putsy, but not hard.

What You Need:
3- 6″ chocolate cakes
– I used a boxed mix and doctored it, but you could also do my scratch chocolate cake. You basically want three 6″ round by 2″ tall cakes.
4-6 cups icing
– I made Salted Caramel Swiss Meringue Buttercream Icing by adding an extra 1/2-3/4 tsp. of salt to my Caramel Buttercream Recipe.
2-3 cups mixed sprinkles
– I bought 4 bottles of sprinkles, of varying shapes, sizes and types, and combined them in a jar to mix well. (You can buy “unicorn mix,” but they are usually pastel, and 13-year-old boys don’t love pastel.) 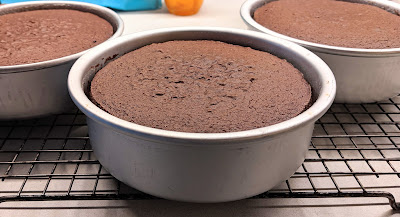 I used one chocolate cake mix divided among three 6″ cake pans. If your cakes are domed, you need to be sure that you level each cake because this cake gets tall, and it must be level.
I then divided each 2″ tall cake into two 1″ layers, leaving me with six layers of cake.

I made 1.5 batches of Salted Caramel Buttercream (add 1/2-3/4 tsp. of salt to the original linked recipe to make it salted). I then separated into five cups 1/3-1/2 cup of icing to color for the rainbow of icing inside. Leaving at least 3 cups of icing for the outside of the cake. I should have actually measured so that each layer would have been the same thickness… but I didn’t. 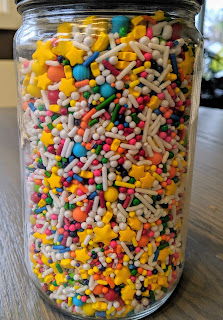 I combined four or so bottles of sprinkles, including one called “Birthday Mix” that had the stars and large balls in it. To that, I added some multi-colored ball sprinkles in two sizes, some multi-colored jimmies, and some white balls and jimmies. I also added some clear sparkling sugar. I do not recommend this. It ends up sticking to the outside more than the others, and it makes it harder to make the cake look covered. 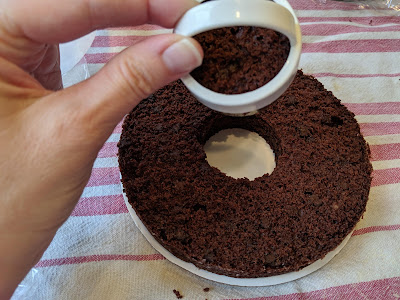 Place the bottom layer on a 6″ cake circle. I find that using a same-sized cake circle makes getting the sprinkles on the outside easier. But you could also place it directly on your cake plate, if you wish.
To get the “tunnel” down the middle of the cake, I used a 2″ diameter biscuit cutter. Cut five of the six cake layers with the hole in the middle. 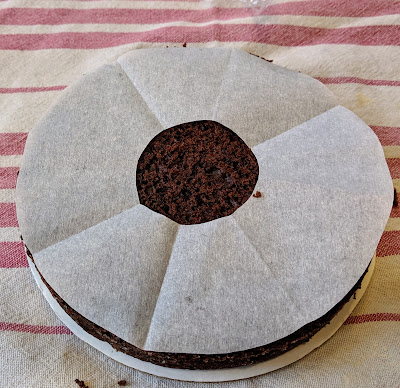 I was nervous about lining it up correctly, so I cut a parchment circle, making a circle for the cutter to cut the same place on each layer. 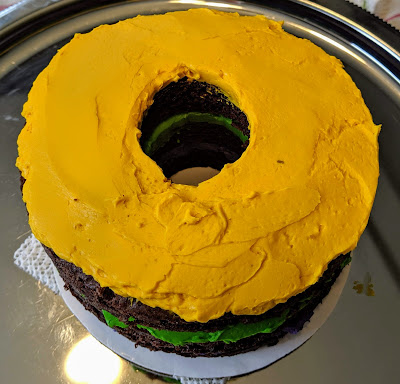 I spread icing in a reverse rainbow (purple on the bottom layer up to red) on each layer. You don’t have to be super careful with this icing because if it overlaps a little, you’re covering the outside of the cake, so you’ll be fine. 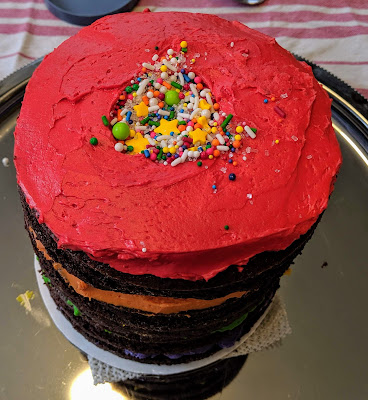 When you’ve iced all five of the layers with holes, spoon or pour the sprinkles into the middle of the cake. 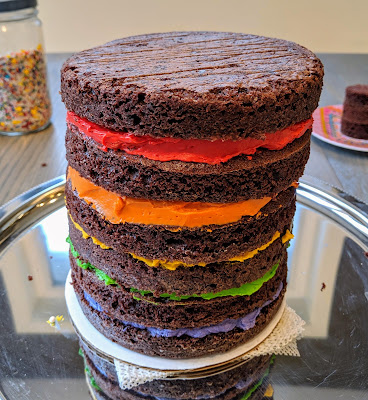 Seal the surprise inside with the last of your cake layers. 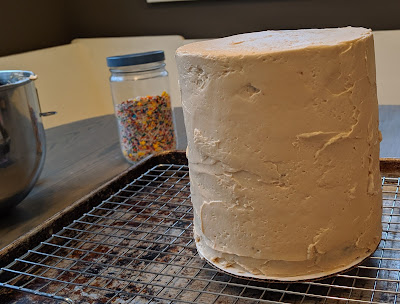 Cover the cake with icing. You don’t have to be great at spreading
icing to make this cake look good because you’re covering the icing with
sprinkles. So, don’t worry if you get crumbs in the icing– or if some
of your colors bleed through.
Here’s my How to Cover a Cake with Icing Tutorial. 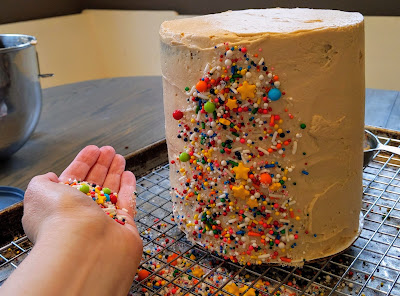 Place the iced cake on a cooling grid placed over a large jellyroll pan. Taking handfuls of sprinkles, gently press them into the sides of the cake, allowing many sprinkles to fall onto the pan below.
*If you’re using the ball-shaped sprinkles, they absolutely will still get all over your kitchen, but the cooling grid and jellyroll pan at least minimize it. 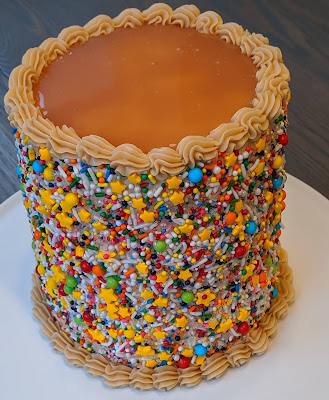 I wanted to add a little caramel sauce to the top, so I added a shell border (tip #21) to the top and bottom of the cake, but I think it would look just as fun if you cover the whole cake, top and sides with sprinkles. 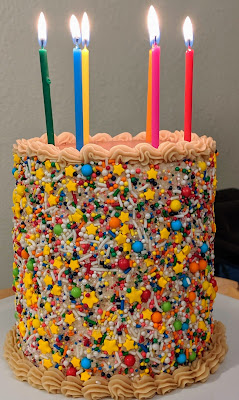 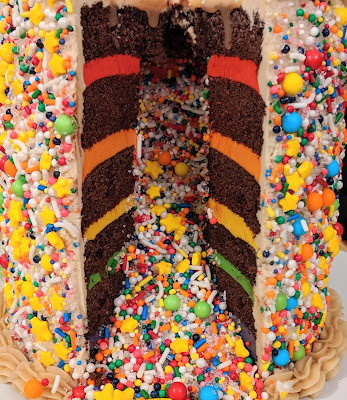 And when you cut inside, it’s even more fun!! I loved it. I hope you will, too!!